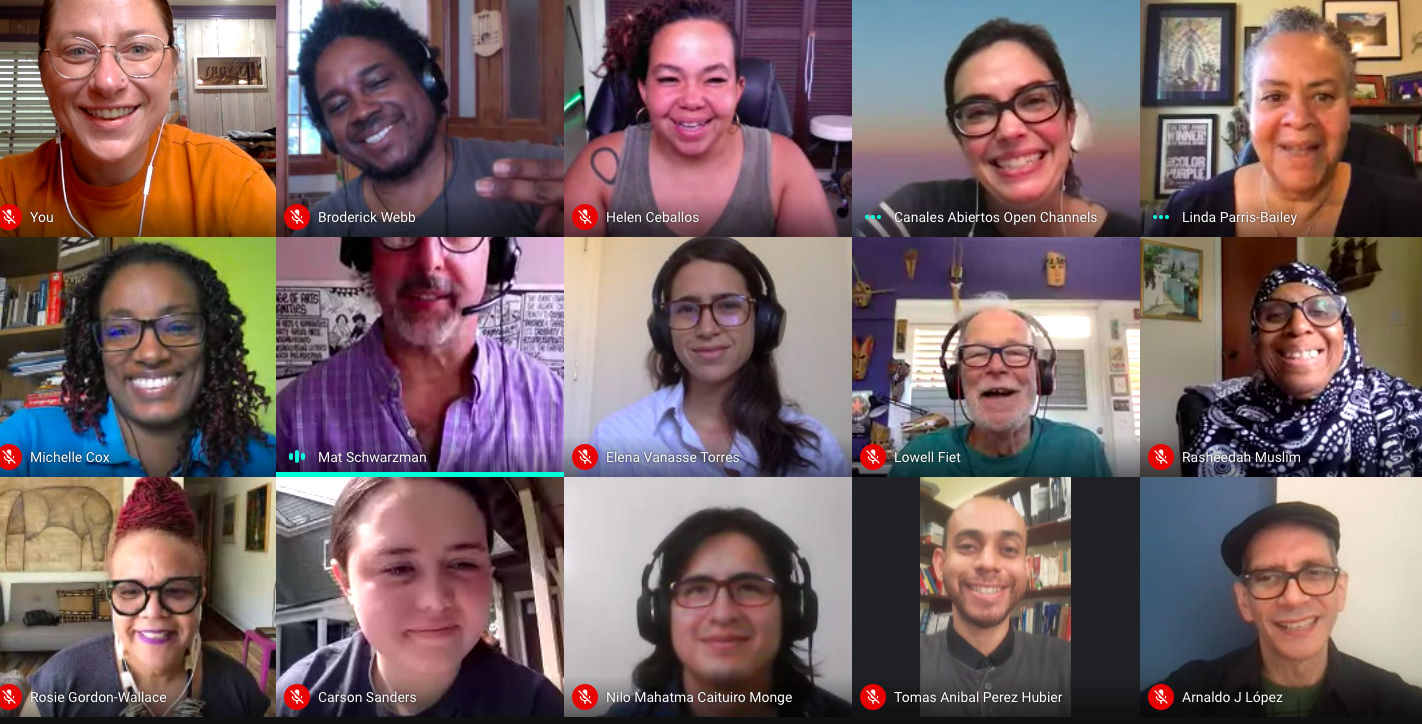 POPULAR THEATER IN THE CARIBBEAN AND ITS DIASPORA

OPEN CHANNELS is a diverse and multilingual global learning community artists, producers, scholars, students and enthusiasts interested in popular theater from the Caribbean with hubs in New Orleans, Santiago de Cuba and elsewhere. Our mission is to understand, support, and celebrate one another’s contributions, skills and talents as creators, cultural workers and humans; and through this mutual aid, move towards the day when there will truly be open channels between all of us.

We are unified by a lifelong desire to participate in the flows and transformations of popular and ensemble theater both within the Caribbean, and from the region to the rest of the world. As a learning community, we build our capacity by making transparent our approaches to creating knowledge both internally and externally through publications, public events and platforms.

In January 2020 Mat Schwarzman and his wife, Mimi Zarsky, traveled with the CubaNOLA Arts Collective, founded and directed by Ariana Hall out of New Orleans, Lousiana, to Santiago de Cuba and Havana, to accompany the great jazz drummer Herlin Riley on his first trip to Cuba to research the foundations of Cuban music and culture. Of course, this journey began in Santiago, which can be considered the “New Orleans” of the island with so many important musical genres originating from this region. The very last cultural outing in Santiago–on the way to the airport to fly to Havana–was a serendipitous visit with Grupo Estudio Tetral Macubá.

As a popular theater artist and educator, Mat Schwarzman was immediately fascinated with Macubá’s mission, work and its founder Fátima Patterson. They stayed in touch, and in the summer of 2019, Mat proposed to Fátima, Ariana and her long time creative collaborator Tomás Montoya, Director of Casa X Cuba, that they join forces to produce a live stream theater panel for July 2020 that would coincide with the annual Taller de Teatro Popular: Rumbos del Teatro Caribeño, a popular theater workshop that Fátima and Macubá produce as part of Santiago’s Festival del Caribe helo in early July. As Mat further refined the idea, he reached out to HowlRound Theatre Commons in Boston, Massachusetts, to be the technical facilitators for the event. The original idea in 2019 was that a core group of 2‐4 people would travel to Santiago de Cuba for Macuba’s theater workshop and participate in and produce the live stream from there. Mat struggled for many months to get all of us to fully commit to this idea. Tomás reached out to Bhagavan de la Rosa and Aramis Fonseca in Santiago to help with production. By February 2020, we were doing some technology tests and slowly moving forward.

Then in March, Covid‐19 changed our global reality. This intriguing live stream idea was suddenly a beacon of hope for Fátima, Macubá, and the CubaNOLA Arts Collective to do meaningful work despite this disorienting new landscape. The group now dedicated their time to amplifying Mat’s original vision which had now evolved to a much larger 3 hours virtual event organized by theater artists, scholars, and enthusiasts from all over the Caribbean and its diaspora. Tomás brought in Carolina Caballero from Tulane University. Fátima recruited the first round of Cuban project advisors, Vivian Martínez Tabares, Consuelo Patterson Duany, Margarita Borges, and Fiorella Franco. Mat recruited the first round of U.S. advisors, including Linda Parris‐Bailey, Arnaldo López, Rosie Gordon‐Wallace, and Karen Allen Baxter. Grace Graugnard, Carolina Hernández, and Broderick Webb joined the production team based in New Orleans. And that’s how Open Channels came to be, but it was only the beginning.